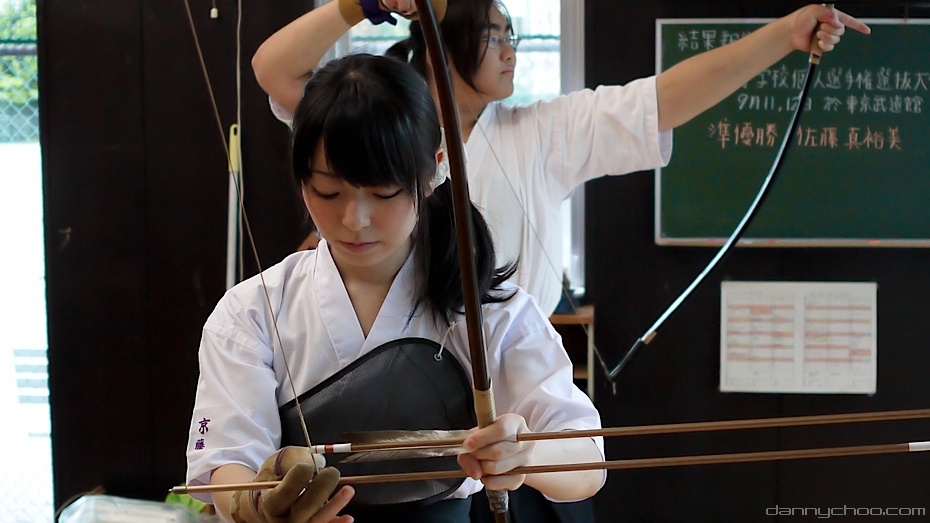 The Empty Mind: The Art of Kyudo

Kyudo or Japanese Zen archery is the art of controlling the mind, the body, and conduct.

Kyudo is Japanese archery melded with the influence of both Shinto and Zen Buddhism, an offshoot martial art of kyujutsu. From there, it was developed as a spiritual meditation that utilizes the elements of focus, discipline and precision to achieve Zen.

The Art of Shooting

From its name, kyudo means “the way of the Bow” and is one of Japan’s oldest martial arts.

Typical kyudojos or practice halls for kyudo consist of shooting ranges that start with one-meter target boards. While a full kyudo master practices on 28-meter targets, kyudo encourages novice practitioners to start with a close-range hall.

As a spiritual practice, kyudo places emphasis on the stance which it breaks down into eight stages: footing, correcting, readying the bow, raising the bow, drawing the bow, completing the draw, the release, and the lowering of the bow. With each stance, senseis hold down the pose and proceed with a very slow flow similar to Tai chi.

The poses and the breathing constitute the most important part of the meditation of kyudo – being mindful and emptying your mind at the same time to perfect your form. Shooting without shooting and not fixating on hitting the target is the core principle of kyudo. Contributor Yogali notes that even holding down a pose help you begin to witness yourself as a third-party spectator. This state gives you more insight and awareness on where your mind goes even outside meditation.

Kyudo’s enlightenment is the transcendence of your physical surrounding and connecting with your inner self. A Washington Post think piece on archery in Japan states, “In kyudo, the sound of a pierced target is meant to awaken the archer from a dream-world clouded by ego and cultural conditioning, revealing the interconnectivity of self, nature, everything.”

The Way of the Arrow

Also called fudoshin, the equanimity and steadiness that kyudo practitioners nurture despite external distractions hardens their state of mind. As a way of life, this manifests even outside the kyudojo.

A book written by Jérôme Chouchan entitled ‘Target’ which links business wisdom to the art of kyudo postulates that the mindfulness of the archery practice can improve your business acumen. Pulling from the principles of drawing a bow while focusing more on your form, it parallels that business can transcend the ego and greed – leading to higher productivity. Recently, there have been newly recognized connections between a person’s ability to learn vis-a-vis the state of their mental health, for which Maryville University attributes the increasing demand for psychology expertise in a variety of industries and fields. This in turn, has led to a slew of studies, alternative practices and assessments that are deep diving into how psychology affects business outcomes. Kyudo can teach you to pay more attention to the journey of learning than the act of gaining profit can.

Long time kyudo practitioners aim to develop a discipline of the mind as well as the body. The spirit of kyudo of being focused and mindful, as Swiss sensei Prem Yogi puts it, can cultivate a calm and focused personality. Being able to exude respect and restraint in your daily life are just some of the things kyudo affords its students.